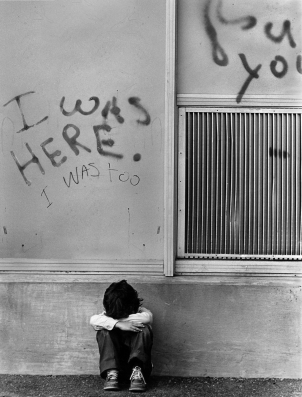 WHAT WOULD HAPPEN TO YOU IF NO ONE KNEW YOU EXISTED?

For "The Kids Off the Grid™ ," the answer to that question is their reality.

"Kids Off The Grid" is a phrase coined by founder of Outpost for Hope Libba Phillips.  They are the most vulnerable and most hidden population of lost children because they are not accounted for.  They are not on the radar of child welfare agencies or listed in any missing persons database. Some are simply unknown because they are born to teen or adult mothers who are living on the streets or otherwise missing, others may have been abandoned and left to live by their own means, some may be unreported runaways who have left an abusive home.  All of these children are invisible.

Why they are off the grid does not matter. What matters is what happens to these infants, youth and teens.

Outpost for Hope estimates that while there are approximately 50,000 reported missing juveniles and youth listed in the FBI's National Crime Information Center database, there are at least 1 million or more children who are missing and living on the streets without anyone knowing they exist or are in danger.

For example; each year in the U.S. alone, as many as 2 million youth experience a period of homelessness, and every year more than 5,000 of these young people lose their lives to the streets. (Covenant House)  These numbers do not include other 'kids off the grid' who may be lost and/or have fallen through the cracks in our society. (Libba Phillips, Outpost for Hope)

Some of these children may have safe, loving biological family members or caregivers that would take care of them, if they knew they existed. Finding "missing, missing" people and collaborating with others who work with at-risk children literally could save thousands of children from lives lost to the streets.

The Harsh Reality for Girls and Women on the Streets

The realities faced by women and girls on the streets are harsh. Marginalized women, teenage girls, and their children are the easiest prey for predators, who know that many of these women and girls will not be missed.

In 2004, Gary Leon Ridgeway, The Green River Killer, confessed to murdering 48 teenage girls and women over two decades. "I picked them as victims because they were easy to pick up without being noticed. I knew they would not be reported missing right away and might never be reported missing. I picked them because I thought I could kill as many as I wanted without getting caught." Gary Leon Ridgeway, according to an Associated Press report.