Thank you for visiting Outpost For Hope.

RIVERSIDE --  A man has been convicted of 38 sexual assault-related charges for raping  mentally impaired women and holding them as sex slaves.

Peter Frances Milosavjevic was charged with sexually brutalized as many as 11 mentally-impaired homeless women over a four-year span.

Prosecutors said the 57-year old invited the women into his home on the pretext of giving them shelter and then attacked them.

But Milosavjevic claimed that all of the women he brought into his Rios Road duplex came by choice and engaged in sex with him consensually.

According to prosecutors, the defendant cruised streets, bus stations and anywhere else he might find dispossessed, drug-addicted and developmentally disabled women to exploit.

Milosavjevic's prior convictions include the sexual assault and beating of a woman in 1983, and the brutalizing of another woman 10 years later -- an assault that put the mentally impaired victim in a coma for days.

Milosavjevic served five years of a 13-year sentence for the latter crime and was paroled in 2000.

Milosavjevic faces life in prison when he is sentenced on Nov. 21. 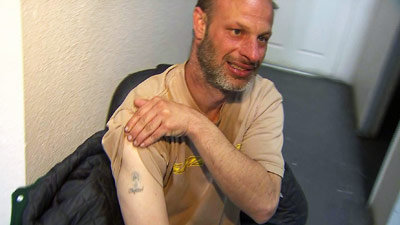 Mentally Disabled Man Dumped on Skid Row: Do You Know His ID?Share
April 2 at 1:28pm

"Jason" is mentally disabled and does not know his full name. (KTLA-TV)

LOS ANGELES -- Authorities are asking for the public's help in identifying a mentally disabled man who was dumped on downtown Los Angeles' Skid Row months ago and doesn't even know his full name. A woman who allegedly abandoned him is accused of cashing in his monthly Social Security checks.

"Jason" was left in front of the Urban Connection group home for the homeless about eight months ago by a woman he calls "Mary." He had no identification and no social security number.

The shelter has been trying to determine his identity ever since, but they've been having trouble because he has no identification card.

The man, who is mentally handicapped, has "Jason" tattooed on his arm. He does not remember his birthday and has no idea where his family might be.When police ran his fingerprints, the name Jason Missel popped up. But, that name doesn't exist under Social Security computer systems.

He says he received Social Security benefits but only recalls that "Mary" handled his checks. It's believed she has been cashing the checks, which could amount to as much as $1,000 a month.

"It's people taking advantage of the mentally ill," Antonio Vera of Urban Connection told KTLA. Jason says he lived in Las Vegas before he was dropped off in Los Angeles. He's pleading for his family to claim him.

"Hi family, I miss you guys," Jason said when asked what he would tell his relatives. "Come back. Come see me."

No one in Nevada or California has filed a missing persons report for him. Anyone who recognizes Jason is urged to call Los Angeles Police Department detectives at 213-996-1800

New York (CNN) -- A 13-year-old teenager with Asperger's syndrome spent 11 days in October wandering New York's vast subway system until a police officer recognized him from a missing persons' poster, according to police and the youth's mother.

Francisco Hernandez Jr., who has Asperger's, a developmental disorder that affects the ability to socialize and communicate, disappeared on October 15, after he thought he was in trouble at school, according to his mother, Marsiela Garcia of Brooklyn.

Garcia told CNN that she contacted police when her son went missing, but received little help.

Garcia said she and her husband took matters into their own hands and posted signs and fliers around the neighborhood, in public areas, even in the subway. "Nobody told me nothing," she said.

The teen was eventually identified by a transit police officer in the Coney Island section of New York, after the officer recognized him from the fliers that had been posted throughout the subway system. He was returned home unharmed.

Garcia said her son wore the same clothes for 11 days, slept in subway cars, used bathrooms in stations and spent most of his time over those days underground. He had $11 when he disappeared, she said, and he ate lollipops, potato chips and other food he bought in subway stations.

"He's never explained (to) me what happened in these days," Garcia said.

Francisco told his mother he didn't ask for help or communicate with anyone, which experts say is not uncommon for people with Asperger's syndrome.

The New York City Police Department originally treated her son's case as that of a runaway, Garcia said. After five days, the police department's missing persons unit paid her a visit and gave her advice on where to look, she said.

Garcia, 38, a housekeeper who came to the United States from Mexico 16 years ago, said she became so frustrated that she turned to the Mexican consulate in New York for help, and she said the consulate again contacted police.

The youth spoke briefly to CNN, saying that a transit officer approached him and asked whether he was the boy on the missing persons posters. "I just said that I'm Francisco and that's it. I just went with him," the teen said.

New York Police Commissioner Ray Kelly was asked about police actions in the case on Tuesday, during a news conference on other, unrelated subjects. He said police "waited for a few days, because obviously (the missing persons unit) would be overwhelmed if we took every report of a young teenager not home."

"I believe that all appropriate action was taken to find this young man," Kelly told reporters.

Unfortunately, the business I'm in tends to put me in the front lines for attempting to find John and Jane Doe's next of kin. Through a forwarded email, I was able to look through this site. I must admit I was very impressed and surprised I had not come across it before. I will always be vigilant and use this page as a reference in my work in attempting to find next of kin for those lost souls. Thank You for another tool in looking for the lost. My thoughts and prayers go to ALL who have suffered such a loss.

Five years ago Libba Phillips sister, Ashley, disappeared off the streets of Tampa, Fla; becoming what her sister believed was a sad statistic -- one of the more than 840,000 people who are reported as missing in this country.

But she was wrong. Police wouldn't classify 20-year-old Ashley as a missing person at all. Instead, Ashley became one of the missing, missing, as Phillips puts it -- one of the unknown thousands whose disappearance doesn't meet police criteria for an active search.

In 2001 the FBI listed 840,279 missing people, mostly juveniles, but experts believe the true number of missing people in this country easily tops 1 million.

Many of the missing, Phillips says, are people already forgotten by society: prostitutes, drug abusers, the homeless. In many ways, they disappeared long before anyone noticed.

In California, the Department of Justice reported 40,780 missing adults and 115,120 missing children in 2003. Not all of the cases involve foul play or kidnapping. Some are people who voluntarily chose to leave their old lives behind; a small number are mentally ill or people who suffer from dementia. Still others met accidental deaths, and their remains have yet to be located.

The state also has the remains of 2,200 unidentified people. In a concerted effort to identify the Jane and John Does, the state mandated the creation of a Missing and Unidentified Persons Unit under the Department of Justice.

The law also requires police departments throughout the state to take DNA samples from relatives of the known missing. The profiles are entered into a computer database to compare with the unidentified remains and any that might be found in the future.

The FBI operates the National Crime Information Center, which provides a wealth of information on crime, criminals, the missing and unidentified remains. But the system is under-utilized, Phillips said. Of the thousands of unidentified remains stored in morgues and buried in pauper's graves around the country, there are just 6,200 cases in the database.

The matching of remains with names is a difficult one. Often, the bodies retain few identifying marks. DNA is the best identifier, but a usable sample can be difficult to obtain, and if there is nothing to match it to, the mystery endures.

In recent years a volunteer organization has stepped up to try to bridge the gap between states and among police departments. The international Doe Network uses the Internet to post details on missing people throughout the United States and other countries.

The long, painful search for her sister led Phillips to volunteer with the Doe Network. She eventually became the area director for Northern California, based in Sacramento. She also created her own organization, Outpost for Hope, which publicizes the disappearance of people like Ashley -- people who fall through the cracks.

The problem, police officials say, lies in the sheer number of people who go missing. It would be impossible to actively search for them all; officers would have no time for anything else. So they prioritize. Those who are considered in the greatest danger get the most attention, both locally and nationally.

The search for missing people often comes down to families who hire private investigators, who call coroner's offices and hospitals throughout the country, and who post fliers and Internet notices.

That's how Phillips eventually came to locate her sister, four states from where she started, in February 2003. Ashley, in her fragile state, had ended up under the control of someone else. They traveled the countryside and Ashley eventually wound up in North Carolina.

It was Ashley, Phillips says, who found herself. She entered a drug rehab program and when she was released, a woman urged her to contact her family.

Phillips says her family got the happy ending they were seeking. Ashley married the man who helped her get into rehab. They now have a child and a stable home.

"Until you know, you don't give up," Phillips says. "Many of these families just want answers."